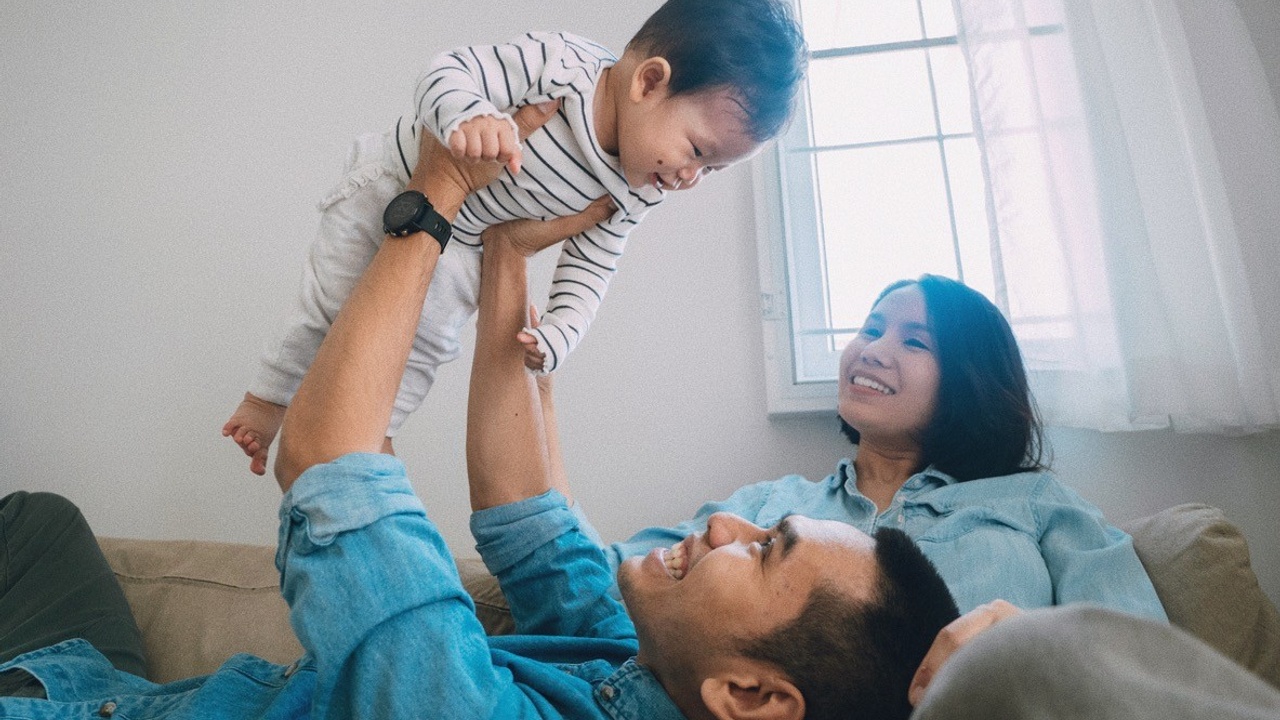 The following is an excerpt from Baby Bomb: A Relationship Survival Guide for New Parents, by Kara Hoppe and Stan Tatkin, now available for purchase here.

When Jude was only a few days old, Charlie and I were sitting all cozy on our couch on a winter afternoon, as we’d done many times before—me on my side, Charlie on his. Only now there was a third person, and his place was on me to nurse. Nursing didn’t come easily for Jude and me. It was challenging to learn how to direct his lips to my breast so he could get a good latch. I had to listen for the sound of him swallowing and watch for his little jaw moving, signs that he was nourishing himself. If I didn’t hear swallowing or see his jaw move, it was time to pull him off gently and retry for a better latch. Eventually I came to think of breastfeeding as one latch at a time, and I did that until we became nursing pros. But on this winter day, pros we were not, and nursing was frustrating. Try as I might, I couldn’t get a good latch.

Finally we managed it. I relaxed as I heard Jude’s swallowing and felt pride and joy. I could do this! As I glanced over at Charlie—blissed out as I was from oxytocin and my sense of accomplishment—I suddenly realized how thirsty nursing made me. And I also realized I couldn’t fix that myself: Jude was firmly planted on me, and I was firmly planted on the couch.

It was such a simple request. Yet it hit me like a proverbial bomb. I needed Charlie—and needed him in ways I hadn’t needed anyone before. When Charlie returned with that glass of water, I looked at him, tears streaming down my face and my throat tight with emotion. All I could say was “I love you so much.” My throat wouldn’t allow any other words to get out.

Baby Bomb is the book Charlie and I could have used when we became parents. Even though we had enjoyed a more-happy-than-not marriage pre-parenthood, we found ourselves struggling after we became parents. We were fortunate to be able to turn for guidance to the principles and practices I knew as a couple therapist. In particular, we leaned hard on the concept of a secure-functioning relationship, which was developed by my mentor Stan Tatkin as part of his psychobiological method for working with couples. In a nutshell, a secure-functioning relationship is one in which the partners are wholeheartedly committed to caring for themselves and each other as their top priority. As we know from research on attachment theory (i.e., that the same strength of bonding that is important between a parent and child in the early years is also important between two adults in an intimate relationship) as well as from neuroscientific evidence, this kind of secure functioning is a couple’s best bet for success.

Charlie and I had made a commitment to practice secure functioning on a day-to-day basis pre-Jude. We each advocated for our own needs and wants, and we took each other’s needs and wants equally seriously. We respected our agreement to care for one another first and foremost. However, when we became parents, we found we had to double down on all that. It suddenly became more difficult to practice secure functioning. The pull to put baby first was so strong that we almost drifted apart and lost our coupledom when Jude hit the scene. He was the sun around which we orbited. Our living room became all-things-baby, complete with a diaper dispenser and changing table. My body was focused entirely on Jude: I ate to nurse, and I slept only to wake and nurture him. I was consumed with tending to his well-being. This seemed to make sense at the time, but it wasn’t sustainable, because it undermined the secure functioning Charlie and I had committed to. Rather than caring for each other first and foremost, we turned away from each other and made Jude our top priority. If anything, our need for care from each other became greater after Jude was born, but neither of us respected that responsibility as we had done pre-parenthood. The result was that Charlie and I both felt neglected and hurt. We were stuck in our own silos, isolated new parents bickering with each other as we just tried to make it through another day.

It took a lot of effort and hard work in the months that followed to protect our coupledom so all three of us could win in the end. We looked for guidance from our mentor couples, friends, and fellow parents, as well as from a variety of books, and we slowly clawed our way back to each other as transformed (and continually transforming) but still madly-in-love partners. Our marriage is deeper in terms of trust, love, respect, and intimacy now that we are parents. However, all that tenderness and wonderfulness didn’t magically arrive with the baby. Charlie and I had to grow as a team and as lovers.

Ultimately, Charlie and I turned to a resource most new parents don’t have: my professional training as a couple therapist. Many of the lessons, principles, and tools I had learned were newly relevant to the health and happiness of our marriage. We were able to take what I knew and use it to revamp our marriage to reflect our new status as parents. These lessons and experiences form the backbone of this book.

It doesn’t matter if you thoughtfully planned for your baby, like we did, or if you wholeheartedly (or with some ambivalence) embraced a big surprise, there is really no way to truly understand what it will be like until you are parents. Furthermore, there is no way to know how being parents will affect your partnership. Responsibilities are gained, and autonomy is lost. Immense joy and love can abound amid feelings of loss and overwhelm.

How do you go about integrating partnering and parenting? The first step is to recognize that you’re bound for change (if you are an expecting couple) or are in the midst of change (if you are already a parent). You understand that the birth of a child can lead to a huge transformation, both for your relationship and for you as new parents.

Second, the best way to turn this transformation into an opportunity for maximum growth is to have lots of support. And that means beginning with your partnership. You and your partner need to be able to support and care for one another before you will be able to do so effectively for your new baby. The key for this is creating a secure-functioning relationship. Stan wrote about secure functioning in Wired for Love, his manual for partners who want to become an effective dyad. Baby Bomb builds on that by showing you how to create a secure-functioning relationship that integrates partnering and parenting.